I grew up in the city.  My meat came from supermarkets, neatly wrapped in cellophane.  Then I married FringeMan and my world changed, so did my food.  Beyond the market, I had no idea where meat originated and to be honest, I just didn’t care.  I’ve always liked eating meat, but did not have much exposure to farming or hunting pre-FringeMan.

Wild game wasn’t in my radar.

Marriage was a shock.  Our lives were a little too reminiscent of Green Acres.  I did not touch raw meat with my bare hands, let alone skin my own food.  I’m proud to say that after years of shock therapy, I can touch raw meat if necessary.

Now, instead of my meat coming from grocery stores, it comes from the great outdoors.

Hunting is a primordial urge in FringeMan.  He must hunt.  He must kill.  We must eat.

He insists eating wild game is healthier for us. ” It’s organic.” he says.  I’ve told him they sell organic meat in the grocery store, but he doesn’t hear.

Let’s see if I can remember last year’s haul.

You can call our cuisine Redneck Gourmet.

Wild game is what we eat.  It also saves us BIG money!

I just refuse to see it on the hoof.

When you deduct meat from your grocery bill, food shopping becomes a whole lot easier on your wallet.

I can already hear some of you saying things like “I could never eat venison.”  I hear ya, I’ve been there and said that, but it’s just a matter of what you’re accustomed to.  If you’d been eating venison all your life, you wouldn’t think twice about it, and with enough spices, almost anything can taste good.

Although, I draw the line at squirrel.  I’m not eating it, despite what my son tells people.  My children have a big imagination and loose lips.

I know hunting is not for everyone.  It’s most certainly not for me, but FringeMan is a mighty hunter at heart.  He loves it.  Spending time in the woods relaxes him and it fills our freezer.

If hunting isn’t for you, there are other ways to save money on meat.

Perhaps you could buy a cow or half of a cow from a farmer and split the meat with three or four other families.  Raising chickens is also a great way to save money.  Eggs anyone?

Find out what day of the week your grocery store discounts almost expired meat.  Many times you’ll be able to buy better cuts of meat at bargain prices.  If you throw the meat in your freezer as soon as you get home, it won’t be a problem.

Buy meat in bulk.  Usually meat is less expensive when purchased in larger quantities.  Of course this isn’t always the case, so learn your prices (price per pound).  As a rule, anything that comes individually packed is going to cost more.  You are paying for convenience, so buy more, wrap it yourself, and spend less.

Buy what’s on sale.  Be flexible with your recipes.  Substitute.  If ground chicken or turkey is on sale, mix it with your ground beef.  Once your meal is cooked and seasoned, it’s not likely anyone will mind.

TIP:  Make meatloaf in a cupcake pan.  You will eat less.

Substitute some meat for beans or make meatless meals once or twice a week.  You’ll save money and be healthier for it.

Harvesting our own meat is one way we save a lot of money on our food bill.

When it comes to buying, eating, and cooking meat, how do you save money?

For more cheap tricks, please click on the image below. 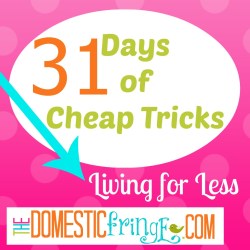 Inspired Gardening
Save Money, Swap It